Draugr are the “zombies of Norse mythology. There considered ghosts and live in a dead mans grave. They were considered to be the ghosts of important men who were buring with wealth and they jelously gaurd their wealth even after death. Their believed to have inhuman strength, rise from their graves like a wisp of smoke of “swim” through solid rock, and to shrink or enlarge their body size and weight. They have many ways of killing a person such as: crushing them to death with their enlarged body, eating their flesh, eating the body whole while enlarged, driving them insane and killing them that way, or drinking their blood. They have the same affect of driving animals crazy too. They can shift into seals or cats, if they turn into a horse they wont have ears or a tail. They can curse a person and bring darkness during the day tempararally. Many people have traditons to stop a person from becoming a draugr. They would put an open pair of iron scissors on the chest of the dead person, straws and twigs may be hidden in their clothes. The big toes were tied togther of needles were stuck through the soles of the feet to stop the corpse from walking. Also as the people walked the coffing the the grave it would need to me lifted and lowered in different directions to confuse its sense of direction. 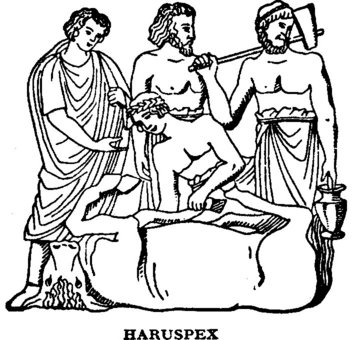 A haruspex is a person who can see the future in the organs of a sacraficed animal. They were considered prophets and seers to what lay ahead of life. They would study the entrails and liver of the sacrifced animals and they would see what was to come and were never wrong about what they saw. Priests would study this form of “seeing” to tell them things about a patients illness. Others used it as a way to tell what the weather would be like in the coming days. Theres not much written about them but they come from norse, babilonian, and roman mythology.